Life is too short for boring hifi!

Spec has grabbed me by the b…s! Not only am I the lucky owner of a Spec RSA-M3EX, but I also seem to be testing myself through their entire range of amplifiers. So now, meet the all new RSA-G3EX, two steps down from the M3!

Spec must have thought the jump from the RSA-717EX up to the top line must have been too big and, seemingly, they have opted for a beefed up version of the 717, rather than a down trim of the top line. The latter is a guess from my side, based on design and power. It looks like a larger 717, and shares the same output power, plus have no switch on the back plate for being pure power amp, for example. That means we’re looking at a 9 kilo amplifier, boasting 100W / channel with a 4 Ohm load. Looking back at the 717, weighing in at 7 kilo, also delivering 100 W / 4 Ohm, that means we’re getting around 50 – 60 W in the more normally measured 8 Ohm. The Spec home pages tells us nothing of this newbie, although the Japanese part of it showing something they call RSA-G1EX. Either a misprint, or a different model name in Japan, as the data are exactly the same. Well, I don’t read Japanese, so I can’t follow that up any longer than this.

Obviously a simpler build quality than my chunky M3, it’s still from Japan, and as such sturdy and well built. Facia is simple, just the guarded switch and the two control buttons. On the back plate we find 2 XLR plus 3 RCA inputs, all for line level. The main question in this review will be whether it sounds more 717 than M3, let alone how it compares to the established model V1! The RSA-V1EX is now the only Spec amplifier model I haven’t heard, so my comparison will relate to both the 717 and the M3, we’re left to guess regarding the V1, then. Sorry about all these numbers and letters, folks, in short Spec now has two models in the “lower range”, and three in the upper, let’s leave it at that.

First I want to mention the top model, the RSA F33EX, to find out what Spec is all about. What distinguishes that from the rest, is it’s obvious SET Interstage timbral qualities. Even if my M3 has much of the same qualities as the top model, it doesn’t fool me quite as often as the top model into totally believing I have a SET interstage valve amplifier in front of me. In the other end, the smallest Spec-model sounds more conventional, still having lots of magic about it, given that you use speakers that are easy to drive (high, steady impedance curve, good efficiency). The M3 is an obvious step down from the top model, but still it represent something truly special, as the class D technology never before sounded this natural, this dynamic, and with such openness. Most other class D amps, however good they are, seems to impose a velvet-like character to all recordings, a phenomenon we totally avoid with all the Spec models. Further, the top line also seems to have raw driving power, totally “forgetting” the limitation of the after all small 60 Watt output. The Spec entry level amp did not by any means copy the feeling of sheer power, so a bit more muscles are absolutely welcome. For my part, I mostly enjoy the speakers with simple load factor, so I normally don’t force the amplifiers over the edge, anyway. But you still get that feeling of total calm and unbreakable force, when you have a serious powerhouse in the signal path. The Spec RSA-G3EX has been driving the world class Doxa 8.2, the explosive Klipsch RP280F, and the smooth stand mount Roksan TR5 S2, and here’s what I found out:

First: No doubt in my mind that soundwise, the G3 is closer to the M3 than it is to the 717. Already by that statement, we can se the contour of a bargain. The obvious story is that Spec knows exactly what they’re doing, and they know how to make their amps sound the way they do. Therefore, it’s easy to hear that we are in the same family, when switching between the two amplifiers. The G3 is just that tad “matte” in the colors, making the music a fraction less sparkling and rythmic. Make no mistake, the M3 is (of course) a better amplifier all over, but the differences might be smaller than you would think, especially initially. Insight in room atmospheres, instrument timbres, and the feeling of being close to the soul of the music is better on the M3. The G3 is, on its side, slightly darker voiced, making it slightly better suited to rock and typically electrically charged based music.

Also, especially when listening to high resolution speakers, it is rather clear that the dynamic expression sounds more relaxed when using the G3. I mean, this is absolutely fair, given the price difference between the two. The question remains regarding the amplifier sitting between these two in the Spec portfolio, though. One important thing to remember here, though, is that these initially small differences tends to grow on you; already through my rather short and hectic listening period, I clearly felt that the differences grew more important and clearer each day. One major reason for this phenomenon is the control in the bass; here the smaller amp plays towards a fatter and not so nuanced reproduction, while the expensive model shows a completely different insight, combined with power and control. That’s the reality, folks!

When the G3 drives the lively Doxa 8.2, it is true bliss. The Spec RSA-G3EX is truly a unique piece of equipment, and, it’s very easy to forget that we listen to a class-D amplifier. When listening to “Talk of the town” from the Opus 3 recording of Lars Erstrand, we get a slightly warm and cuddly expression, but still with great timbral qualities. There is a slight touch of veil on the notes, and also slightly hardened notes at higher frequencies, but this is just a hint. The bass is fully controlled and smooth. Over to a much rawer expression, the electronic Diallo song “I play bass”. This is very interesting, as the G3 here kind of meets the ultimate mix of tunes. Hard hitting, suitably fat, still rythmic and  bold. This song comes across even better than with the expensive siblings, impressing indeed.  No hard edges, just control and insight.

I mentioned rock as one of the obvious strengths of the G3. It sure is,  but still, one problem that occurs when playing Rainbow “Down to earth”, is that when swapping between G3 and M3, it doesn’t get more heavy or more realistic with the cheaper model, anyway. On the contrary, as a matter of fact. The M3 wins, hands down. Heavier, bolder, more insight, more music. So let’s just accept that the worlds pecking order remains, and let’s start talking about this little amps strengths! Over to the newer Rainbow song “Hunting humans”, we find a riveting expression, hard hitting, still soft enough to avoid rough edges. Great balance! We detect a small hump in the mid bass area suiting this type of music, all in all very credible, rythmic and involving. Lively and lovely!

On a much more relaxed song from the Linn recording “Quartier Latin” with Barb Jungr, her somewhat difficult voice comes across smooth and near. Oh, yeah, this works for me. The insight is absolutely on the safe side, the voice slightly on the soft and pleasurable side,  although a touch more summarily reproduced than the best. No hard edges, though, making this a good experience again.

On classical orchestras, there is a general feeling that maybe the timbral qualities are not the absolute best I’ve heard, but still well within boundaries. I sincerily enjoy the “mystic” and silent way this amp plays. It’s obviously  free of distortion, and very low on noise, giving us a pitch black background, so good that I’d say we’re at a very seldom level in this price bracket. The typical  “high-end-calm” is here in spades, showing an amplifier with all under control. 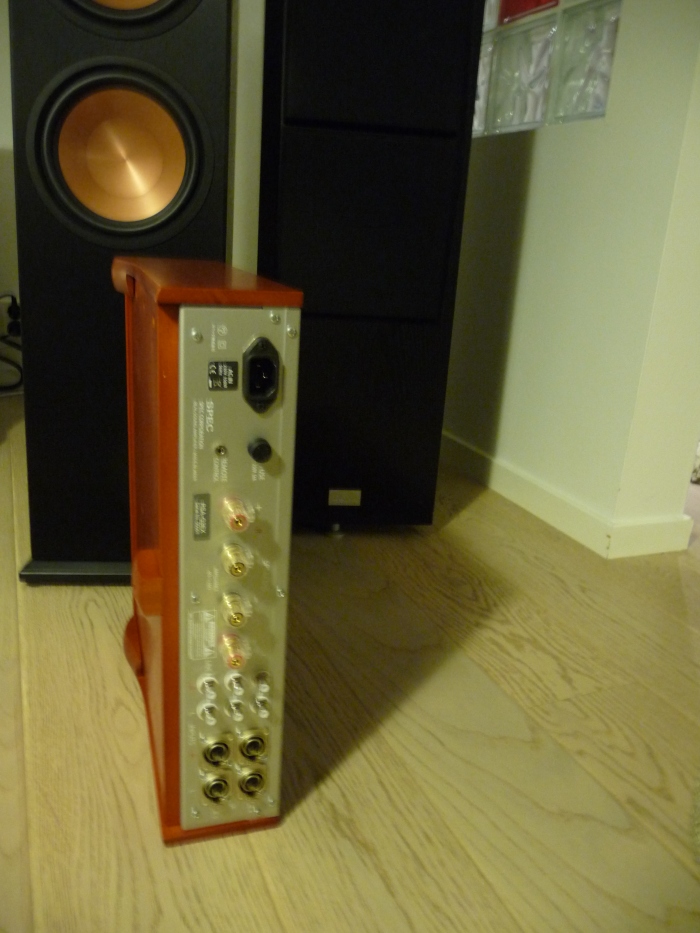 On smaller speakers, the full bodied nature gives a natural boost to the  speakers reproduction. On the smooth and elegant Roksan TR5, we’re pleased to hear a very coherent and almost cozy presentation. A little on the dry side, maybe, but open, vivid and elegant. Again electric music rules, despite the sometimes slightly laidback expression of this combination. Seemingly the TR5 also represents an easy load, the G3 never seems to loose the grip on this speaker. Also, the extremely resolved and open treble floats like feathers in the air. A good, relaxed combination, this.

On the other side of the spectrum we’re listening to the horn hybrid, Klipsch RP-280F; a touch more chaotic speaker, maybe, but explosive like hell! This speaker is seemingly easy to drive, given the extremely efficient nature; Klipsch says 99 dB/ 1W / 1m. A bit optimistic, it seems, but still, not many watts are needed to wake this one up. But, to my surprise, the speaker is demanding, even if it easily plays (extremely) loud. Soon we find that the bass is  somewhat lacking in control, producing a not so harmonic frequency curve on some occasions.  There is an obvious weight in lower mid / upper bass, but the G3 still manages to serve a very clear and insightful reproduction. Especially horns are great here, Gordon Goodwins Big Phat Band excels, still slightly on the fat end, but what a speed and attack! Rythmic as hell, very funny! I just want to play louder, louder, louder…! On the other hand, the amp is forced to it’s knees when Medwyn Goodall’s “Sweet widerness” rolls over it. It gets seriously shaky when the deep pulses comes rolling like sea waves, barely surviving. But, fair enough, it didn’t fall flat on it’s arse, even if it was taking a serious beating for a while there. 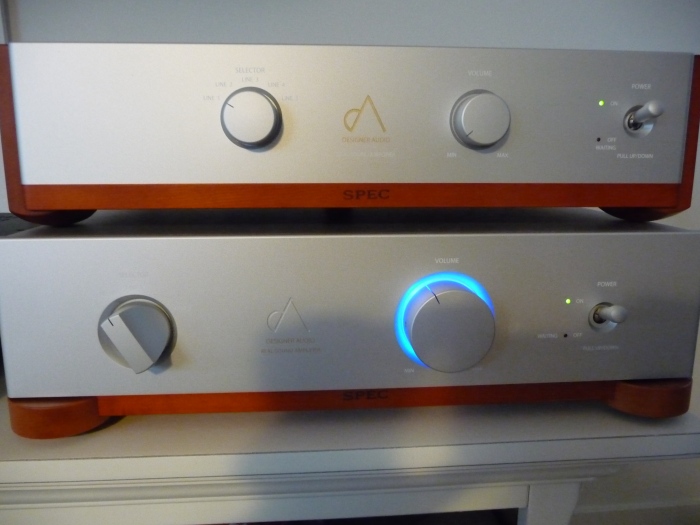 What can I say? Spec is the real thing! They obviously know how to make class D sound more genuine and natural than any other producer I’ve heard. (Yes, that includes some extremely expensive french gear as well). The natural and vivid sound reproduction continues through the models, although slightly heading towards the more “normal” class-D amplifiers on the smaller models, the tested G3 included, then. But, that said, we still get so much natural and lively music out of these boxes, that I don’t know any other brand being capable of making class-D like this. But of course, there is a downside, as well. The G3 must be carefully partnered, as it’s slightly underpowered to drive heavy loads. I suggest typically simple, but extremely good speakers, like the Kudos Cardea series, the Spendor A6R, Audio Note speakers or the Doxa 8.2J. When this is under control, you never need to look anywhere else!